The After Trilogy has a New Look!

It’s hard to believe four and a half years have passed since you guys first read book one in this series. My journey with Romy, Atlas, and Knot 27 began two years prior when I first heard their banter on a bus ride in Ireland.

This adventure fantasy combines two of my favourite subjects, friendship and love, with my interest in science to create a dystopian romance filled with all the tropes consistent throughout my books – grey personalities, hidden agendas, betrayal, and a lot of laughter.

Romy holds a dear place in my heart. Her strength is so different to the female characters we often see in fantasy. Hers is a quiet power, but if there’s one thing I hope you left the series with it’s that quiet power is just as strong as the loud kind. It’s to our detriment that we underestimate those with kind hearts who are loyal and generous to a fault.

Those who read between the lines may have realised that Romy’s struggle throughout the series is pretty much a giant metaphor for a mental health battle – my own. This series was written at a time of my life when too many buried problems became something I could no longer ignore. The Retreat marked the start of my lowest and darkest years. For a long time, I wondered if I’d feel happiness again. In contrast, The Reprisal marked the first moment I began to see that speck of light again.

This is why – you might have noticed – that I rarely speak of The After Trilogy. That timeframe held too many painful memories for me. Writing was one of my escapes, actually, but I will always recall how terrible I otherwise felt. Until recent years, this pain was too much to share with you. But today, I can honestly say those years made me a smarter, more accepting and capable person. Now, I remember The After Trilogy in more of a proud survivor kind of way. I’ve wanted to share the truth of this series with you for some months in the hope that if you’re in pain, Romy’s story and my story might help you to see a speck of light again. You are not alone and you are seen.

The changing of the covers and titles really is my celebration of the content place I’ve reached. Regarding the change of title, I recognise this could be hard for those who feel a particular connection to the series. In a way, it does feel like saying goodbye. An deep down, maybe that’s the point of the change in my mind. I do hope the change isn’t too jarring for you.

I feel these new titles really represent Romy and the story, and I’m EXCITED and feeling goooood, so without further delay, your new series title is…

Would you like to see the new covers? Keep scrolling, my friend.

SHUT THE FRONT DOOR! What do you think? Make sure to let me know!

Romy looks pisssssed. Do you remember who made her mad? There are a few who contributed. Can’t recall? Time for a re-read, I think!

Why is Romy’s hair longer in cover three? Read the series and find out – it’s in Kindle Unlimited, did you know? 😉

Now! Regarding the paperbacks, I’ll hold off switching to the new covers and paperbacks until May 10th. If you need to complete your set of original covers, please consider this your final warning to get orders in. The new covers will be available in paperback from May 10th.

I hope you love the new covers! 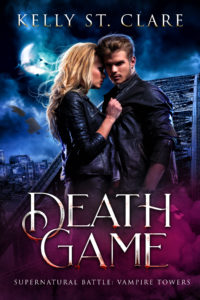